In just a few hours, the Highland High School Marching Band will take the field for this season’s first performance.

My daughter Lauren will be there, starting her fourth and final year as a clarinetist in this award winning band.

It’s a bittersweet day. We’ve watched her and her many “band geek” friends grow and develop over the last few years – into not only amazing musicians, but
into wonderful young adults.

They’ve laughed together, cried together, and celebrated together. These amazing kids start practicing in August. In the 110+ degree heat, and they don’t stop practicing until November. They play at football games, go to competitions, participate in workshops, and practice. And practice more. All in an effort to be the best they can be, often with little support from other students or more sadly, school district administration. They do it for their love of the school, their music, their friends and their art.

This is a truly an incredible and dedicated bunch of young adults.

And virtually without fail, they are good people. They are passionate, fun-loving and well-adjusted. What they’ve learned in band will carry on throughout their lives. Some may never pick up an instrument again, but they take with them the ability to work as a team, to help one another, to feel empathy and compassion for others. And they even learn how to have a little fun along the way.

At some point in this school year, it is almost assured that the school district administration will make more budget cuts and the band and other arts programs will once again come under scrutiny. The incredible Highland band directors will rally the troops, the kids will rally, and some of us will descend on a school board meeting, yet again, and plead, beg and grovel to avoid further spending cuts.

We’ll do what we have to do. It’s just part of the program now. And we won’t let any of that tarnish the season.

One of the things that has struck me as a band parent over these years is how close the “band family” is across all schools. Three years ago when Highland High band member Kelly Tracy was killed by a drunk driver, every high school in the Gilbert Independent School District, and some outside the district, held fundraising events. Shortly after Kelly’s tragic death, Highland played at Brophy Prep in a playoff game. Brophy allowed the Highland Band to take the field and play the National Anthem and the Brophy fans gave them a standing ovation. Later in the game, the Brophy band joined Highland in playing the Highland fight song. What a wonderful gesture and sign of solidarity in an exceedingly difficult time that was.

These bands may compete against each other on the field, but they have each other’s backs when it counts.

I’ve seen former Highland students that are now in college come back to address the school board on the importance of their high school music education. How many college students would take the time, sometimes several years later, to come and speak passionately about something they did in high school?

Tonight will be the first performance of the season, a season filled with hopes and dreams. Some of those dreams will come true, and some will not. Regardless of the competition results, all of these young adults will grow, share, learn and develop. There will be arguments, and hugs. Some tears of joy, and some tears of sadness will fall.

I tip my shako to all the band geeks out there, their parents who support them, the amazing band directors that give so much to our kids, and to all who know what it is like to take the field and do what you love.

About the photo: That’s a shot of my daughter after the last performance of their 2009 season, when they won the Arizona State Championship. She’s not going to be particularly happy I used it, but it was the best shot I had that captured the love and passion these young adults have for what they do. 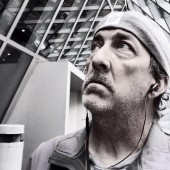 Custom Fundraising Solutions Partners with the Association of Music Parents

The Final Show OR Love of Music and Family

How Much Should Your Music Student Practice?

What Your Child Won’t Tell You About College Band